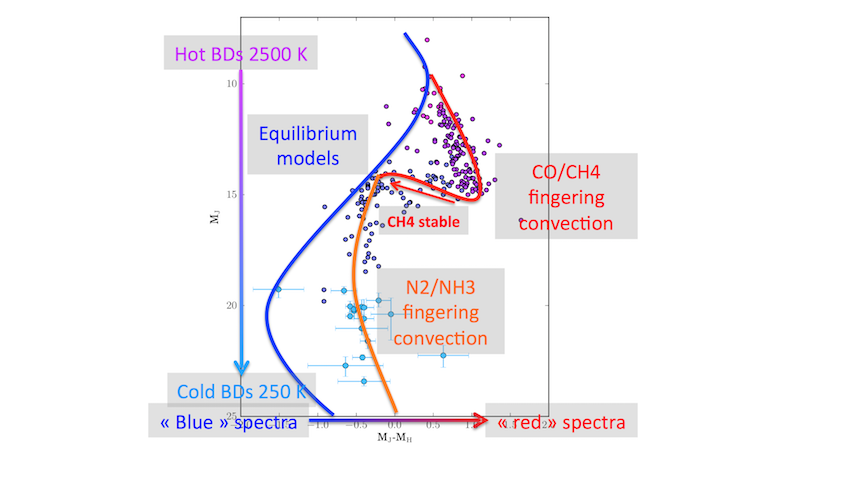 The admitted, conventional scenario to explain the complex spectral evolution of brown dwarfs (BDs) since their first detection 20 years ago has always been the key role played by micron-size condensates, called “dust” or “clouds,” in their atmosphere. This scenario, however, faces major problems, in particular the J-band brightening and the resurgence of FeH absorption at the L to T transition, and a physical first-principle understanding of this transition is lacking. In a Letter published in ApJL, we propose a new, completely different explanation for BD and extrasolar giant planet (EGP) spectral evolution, without the need to invoke clouds. We show that, due to the slowness of the CO/ CH4 and N2/NH3 chemical reactions, brown dwarf (L and T, respectively) and EGP atmospheres are subject to a thermo-chemical instability similar in nature to the fingering or chemical convective instability present in Earth oceans and at the Earth core/mantle boundary. The induced small-scale turbulent energy transport reduces the temperature gradient in the atmosphere, explaining the observed increase in near-infrared J–H and J–K colors of L dwarfs and hot EGPs, while a warming up of the deep atmosphere along the L to T transition, as the CO/CH4 instability vanishes, naturally solves the two aforementioned puzzles, and provides a physical explanation of the L to T transition. This new picture leads to a drastic revision of our understanding of BD and EGP atmospheres and their evolution.